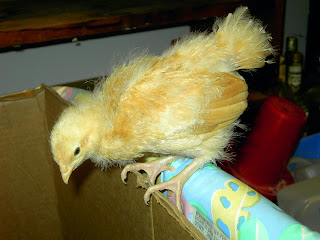 Well now, the BHF chicken flock has had a bit of a setback. I have been thinking about writing about it for two weeks now, for it was two weeks ago that disaster struck.

You can see my post about it in the poultry forum at Homesteading Today here.

The short version is that about 10 days after they arrived, 14 of our 18 Buff Orpington chicks DIED, all at once, in about 15 minutes. The consensus is that they died from stress. The 24 hours before the mayhem was not a very good time for them. They had a 40 degree temperature swing in the brooder, when I expanded their brooder area (by employing an old baby playpen) and lined it with heavy cardboard. The new setup retained heat much better than the thin walls of the plastic tote they started out in. So, when I left the heat lamp at the same setting, and ADDED an additional heat lamp, they got too warm. The temp reading under the lamp was 104 degrees. The temp was lower in areas of the brooder far from the lamp, and the chicks were all gathered in that area.

When the temp was finally corrected and stabilized, the power went out in the middle of the night, and the temp dropped to 65 degrees. Poor little pips.

So that was the first stressor. They seemed ok to me despite this abuse, but I didn't know at the time that you can't really SEE when they are that freaked out, and by the time you do, it is too late.

The second stressor was our cat Magic. He jumped into the new larger brooder setup and grabbed one of the chicks. RG rescued the chick and he seemed to be uninjured. No broken skin. A few wet feathers. We put him back in the brooder.

Then about one hour later, chicks started just falling over dead. Some of them spasmed as they died, and others just sort of went limp. It was horrible.

All this occurred right as we were supposed to be leaving for our weekend in Maine to learn about raising goats. We got off to a late start as we dealt with the dead chicks and waited as long as we could to see if the remaining 3 would make it.

Oh. I just remembered now.. we put the chicks in a bag in the freezer in the garage. I had forgotten about that. I guess we had better do something with them. [ This brings to mind the time that my cocktiel ALVIN died in my apartment in Haverhill, MA in the wintertime; sometime in the late 80s. I carried Alvin's dead body around in the trunk of my Subaru until springtime and then buried him out in the woods one day while on a trail ride. ]

My mood was very dark during Goat School (which I will cover in another post). I wondered how I could raise goats if my touch with chickens is so obviously bad.

The mood has passed, I am happy to report. The three remaining chicks, two males and female are growing very nicely. I wasn't planning to band my chickens, why bother? But I think I will now band these three because they are hearty ones and should be good for the BHF poultry gene pool. 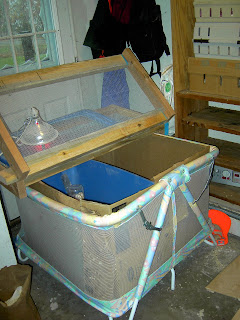 I built a nice wire brooder top for the playpen last weekend and added some old canoe seat frames for them to roost upon. I have also started watering them with a rabbit waterer. The kind that is an upside down bottle with a steel nipple at the end. There is much less waste, and they don't fling bedding & poo into their water this way. They seem to have adapted to it just fine. This is good, because this is how I want to water them when they get into their big outdoor coop. I will make a waterer out of a heated pail with some watering nipples installed in the bottom.

Anyway, as you can see in the picture at the top and those below, the 3 we have left have grown a lot, and are sporting some very nice feathers. The photo at the top is our one hen chick (pullet) and the headshot below is a boy. The boy is starting to grow a little crest. The hen has some nice tailfeathers happening. 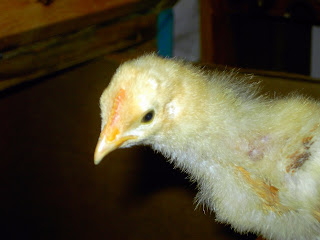 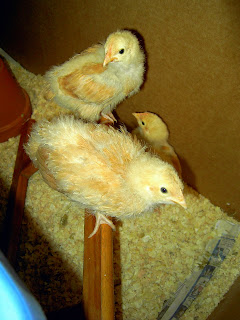 The slideshows below are more pictures of the chicks we have now, and the whole flock before the disaster. Of course, if you are looking at this from your job, and your company blocks access as mine does to "Personal Network Storage and Backup" sites, like the Google-Picasa site where I publish my photos, you won't be able to see these slideshows from work. Sorry. I feel for you! (grumble)

I want to acknowledge that maintaining this farm journal blog is just going to have to be secondary to maintaining a farm. I think posts will come in spurts on rainy days like this one. I have a few things to post about today... I hope I will get to them all. RG has an "Octoberfest" gig all day. T is climbing the walls waiting for 6:00 to roll around, when we will go to the town Halloween Party. That is going to be a drippy event, no doubt.

There will (no doubt) be pictures up at http://picasaweb.google.com/suzaga of halloween costumes and other things.

In fact, updates to the picture albums come in spurts too, not a bad idea to check there from time to time if you want updates on what's in my camera. The camera card is only 128mb.. I usually update the web albums when I am forced to dump the card.

So, on this drippy, runny day, I asked what I could do to forward BHF ? Not much, it turns out. So I'm blogging. I'm also making some kind of stew concoction out of some North Hero yellow-eye beans that my neighbor sells. I've wanted to cook those for a very long time. And I have a loaf of crusty whole wheat bread rising in the oven right now too. I didn't even use the bread machine. It turns out that kneading dough is a very satisfying activity.

I have no pictures of this day, unfortunately. The lawn is still bright green and it is increasingly covered by yellow-orange leaves falling off our big old maple tree in the front yard. The view to the lake is opening up more as leaves fall from the trees over there. In fact I can see some very hearty kayakers out there now, paddling along in a steady rainfall. It may not be raining as hard as I think it is; I am being treated to the sound of rain on the porch roof. It is probably louder than it is wet.
Posted by Suz at 4:16 PM No comments:

Vacation Pix are Up

Our summer vacation pics are finally up at

http://picasaweb.google.com/suzaga/KennebunkportAug2007
Posted by Suz at 1:02 AM No comments: 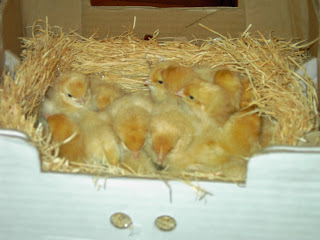 Well here we go! After many months of pining and whining, BHF now has livestock. Poultry livestock, that is!!

Our chicks arrived from Meyer Hatchery in Ohio today, Oct 2. We thought they were being shipped today. But that must have been yesterday, because at around 3pm, RG received a phone call from our postmaster, Jim. "You have some chickens here."

So I left work and came home. I hadn't completely set up the brooder yet. I made it out of a 30 gallon tote several weeks ago, and I had tested the heat lamp control awhile ago, but it wasn't ready with bedding, food & water yet.

When I got home, I put in 1-2" of shavings, covered that with paper towels. I filled the 1-qt waterer and added 1/8 C of sugar. Just a little nip for the first drink. I mixed together some medicated chick starter crumbles and some pidgeon grit. Pidgeon grit is all they had at the St Albans Creamery Coop.. So that's what I got. I have the feeling that the exact details of all the info I have read about starting chicks is not too exact. Websites and blogs will tell you not to use the calcium grit but to use the granite grit for chicks. Well the farmers around here aren't too particular apparently. Otherwise, I'd bet the Coop would have more choices.

I hope T's grip isn't as tight as it looks! 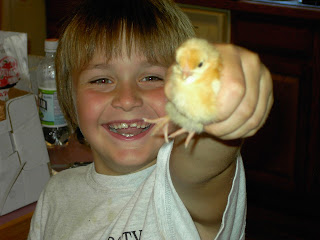 After I got the brooder all ready, T got home from his buddy Ike's house. [ He went over there after school to take a shower.. we haven't had hot water since last Thursday...] He was just in time to help introduce the chicks to their new home. They were peeping up a storm all this time.

So we all took turns, RG, T, and I all took turns taking chicks out of the box one at a time. We stuck their little beaks in the water and then set them down. They got busy with the feed and the water right away. So far so good.

The first few chickies settling in. Oh, by the way, these are Buff Orpingtons, 12 females and 6 males. And they seem to fit in the brooder just fine, for now at least. I was worried they'd be more crowded. 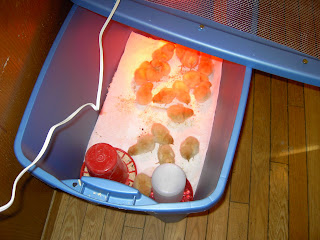 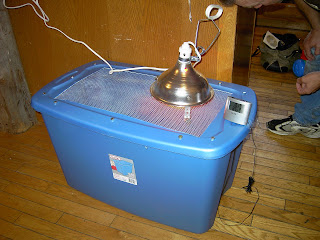 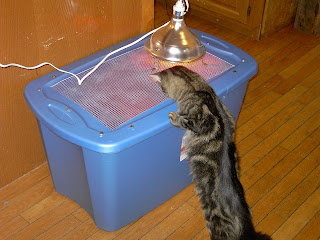