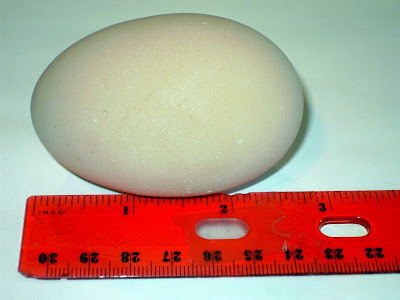 Un Oeuf For a Meal 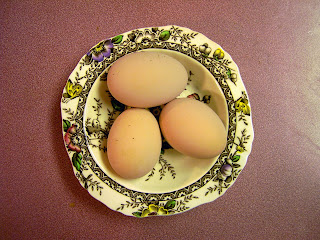 We found our first egg on March 14. On March 16 we found another, and on March 17, a third. Each one was a little larger than the first. The 3rd egg is the one at the top of the photo.

On Tueday March 18 we ate them for supper. (Monday the 17th was out because we had corned beef and Guinness.)

It was quite an event. RG opened each one with the greatest of care, and we carefully studied each one. Why so interested? Well, since there are two roos living in the coop, then these eggs will be fertilized.. Egg 1, the smallest of the three, did not appear to be fertilized. But 2 and 3 were. You can see the little spots in the photos below, esp if you click on the photo to view the larger size. 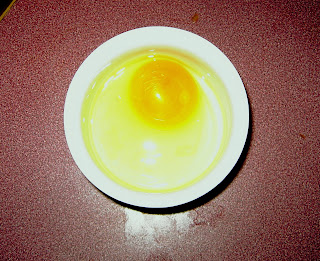 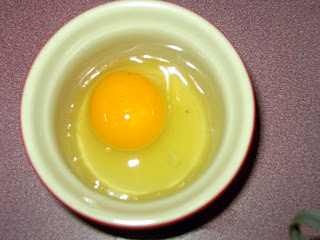 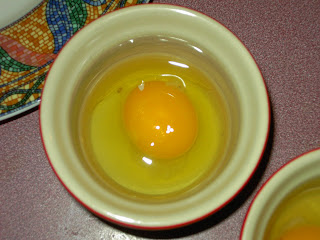 Le troisième
I have been told that once upon a time, some folks believed fertilized eggs to be better for you. I think we know today that this isn't true. At least the USDA says it isn't. And if they say it, it must be true. Especially since commercially produced eggs are unfertilized. The USDA wouldn't say it if weren't so, right? Hmm. But I digress. I don't really think that there is any difference.

After careful inspection, each egg was laid carefully in the pan. I have never cooked a fresh egg before; I have heard that they don't spread out as much as store-bought eggs. As you can see below, one of these spread out a lot more than the other two. I'm guessing that was the first one (the oldest). 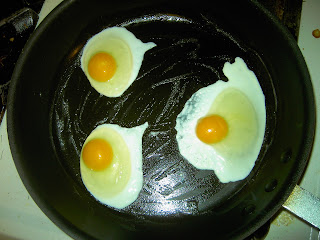 At last, the finished product. Tony had his with toast and a little bit of bison steak. RG and I had ours with salt & pepper (..and leftover corned beef & Guinness!) Very satisfying. 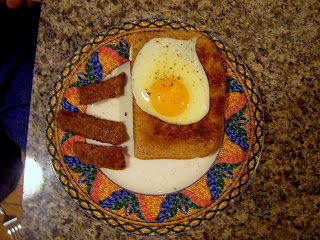 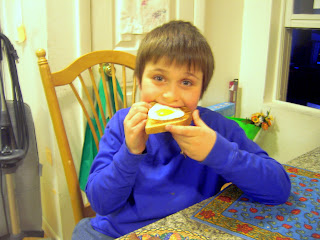 Perhaps this has been more than is necessary for a meal of three fried eggs. Look at it this way; I can never do it again! 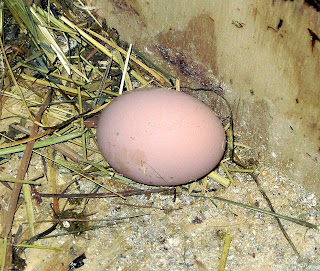 Well, yes, it has been a long time since I last posted. (I suppose most of my posts will begin with a remark something like that..)

There have been plenty of happenings here in the last 4.5 months, but this one can't go without a post. Last evening, March 14, I was standing by the coop, saying to RG, "No eggs yet." And as I said this I opened the coop door and what to my wondering eyes did appear!! [ Not a miniature sleigh with 8 tiny reindeer, no.] EGG NUMBER ONE!!!! And there was the creator, Penny, my number one hen, looking at it. I suppose she was wondering where that came from. 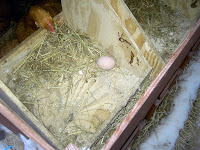 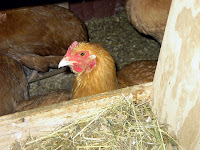 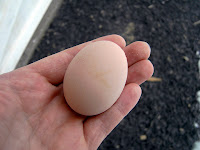 Next day, today, I was out visiting the chickens and I found another. This one was not in a nest box, but laying right out in their little yard. It had been pecked at. Oh, dear. I don't know if this one came before or after last night's prize, but it is certainly NOT a Good Thing that somebody took a peck at it. Fortunately, it was not actually broken open, so I don't think anyone has developed a taste for eggs. But I will have to be vigilant about looking for eggs now.

At this point, Penny (As in "Henny") is the only hen laying. She is the sole surviving hen from the initial flock of chicks. There are also two roos from that flock, named Popeye and Bluto. All three from this flock are quite tame, and I have grown fond of them. [Translation: They won't be in a soup pot anytime soon.] And in fact, Popeye actually loves me back. He literally PURRS when he sees me. In addition, we have 8 hens and 2 roos from a second batch of chicks that we received in November. None of these are quite as tame, as they have always been part of a larger flock and did not get handled daily as the 3 survivors did. The hens from this flock are living outside in the coop with the first 3, and the two roos are still living in the garage, in their own coop, custom-built by RG the handyman. These two are on a meat-bird feed. They aren't outside because they get into fights with Popeye and Bluto. Bloody fights too.

Other BHF Developments:
BOER GOATS!
Now, really, the Goats at BHF deserve their own post, and many of them. This is where I have really dropped the blogger's ball. In November, RG, T and I drove to Maine and purchased two South African Boer goats, Kelli and Taco. Kelli is a lovely 4 yo fullblood red doe, and Taco is a paint yearling wether (neutered male). At the moment, Kelli is "vacationing" in Amsterdam, NY. She is there to be bred to a very handsome red buck. When Kelli comes home in late April, she will be accompanied by two, maybe three other fullbred does, each bred to a different buck. The pictures below are of Kelli and Taco in Maine before we picked them up, and below that a slideshow of them here at home last December, before the snow came. 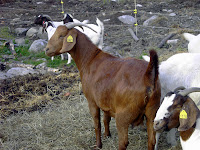 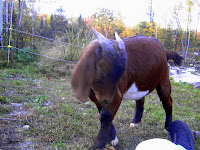 DAIRY GOATS!
Also in April, we will bring home two freshened Saanen does. Saanens are dairy goats. (Boers are a meat breed.) "Freshened" means that they have just kidded and are milking. The arrival of these does will really represent a paradigm shift for us. These gals will need milking every day, twice a day until the fall. Heh heh. You may never hear from me again!!

NEW BARN!
To accommodate our lovely goats, we got a little barn dropped in back last fall. Unfortunately, it didn't get here in time for Kelli & Taco, who are housed temporarily in our storage shed. 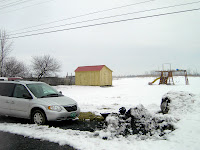 NEW PORCH
The last little thing I will report now is the addition of an enclosed porch onto the back of our house. It doesn't have doors and windows yet; those will be put on in the spring. It was built over our patio. So far it has saved us from the snow/ice buildup that we used to get in front of the kitchen door. This summer it will be a great place to enjoy the outdoors, sans insects and blazing sun. This fine porch was built by J Mabb Construction. 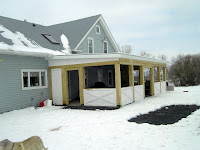 Well there is more but I think I'm going to save it for another post. This one is getting too long.
There are more pictures of chickens, coops, goats etc at the web album below. Look for another update when we eat our first egg. Right now it is safely in the fridge. We haven't decided how to eat it. Sunnyside up is my vote.
Peace,
Suz.